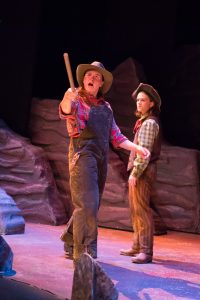 They were adventurers, they risked their lives, they saved each other, they ran rapids and waterfalls, they hunted, fished, drank whiskey, and mapped “unknown territory.” Jaclyn Backhaus set out to write a play about the historic journey of John Wesley Powell and his crew as they traversed the Green and Colorado Rivers into the Grand Canyon. As she worked, Backhaus realized she was writing a play full of roles that she would traditionally be excluded from playing—so, she decided to tell the story another way.

In a casting note, Backhaus explains “the characters in Men on Boats were historically cisgender white males. The cast should be made up entirely of people who are not.” Through workshops and rehearsals, we’ve investigated the ways that gender is expressed and performed, reinforced and questioned, both in the theatre and in everyday life. We’ve had the amazing opportunity to work with dance dramaturg Janet Werther who was instrumental in discovering and exploring the gaps and frictions between the performers and their characters.

By highlighting and commenting on these ideas, Men on Boats pushes us to think about how history is told and retold and how theatre can help us see old stories in a new light. The play asks us to take in the many ways that historic events can be embodied and performed and to consider carefully who gets to tell such tales. It raises questions about what stories have not been told and what accounts have been ignored or neglected. The play is also really funny.

The cast, crew, and designers of Men on Boats have brought this piece of US history to life in a highly theatrical fashion. They have embraced the challenges and excitement of this play and I am again amazed to be surrounded by so much talent and creativity.